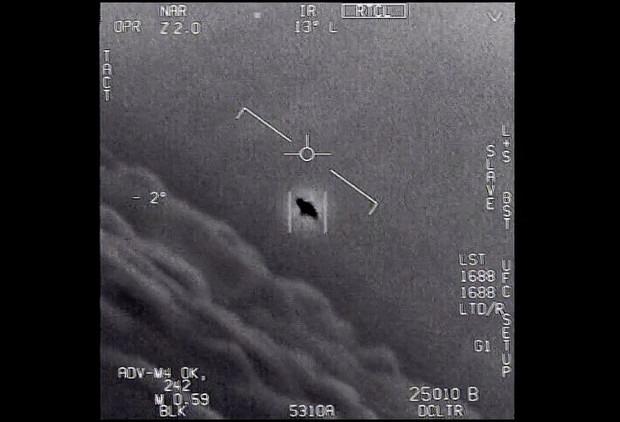 In the image from a video provided by the US Department of Defense labeled Gimbal, from 2015, an unexplained object is seen at the center as it is tracked as it soars high along the clouds, traveling against the wind. (US DEPARTMENT OF DEFENSE VIA AP)

The US government wants to take reports of unidentified flying objects more seriously based on unexplained sightings reported by military pilots over the years, according to a new intelligence report that made no mention of theories that aliens may be visiting.

The report, submitted to Congress and released to the public, encompasses 144 observations of what the government officially refers to as “unidentified aerial phenomenon,” or UAP, dating back to 2004. It was issued by the Office of the Director of National Intelligence in conjunction with a US Navy-led UAP task force.

The report includes some UAP cases that previously came to light in the Pentagon’s release of video from US naval aviators showing enigmatic aircraft off the US East and West Coasts exhibiting speed and maneuverability exceeding known aviation technologies and lacking any visible means of propulsion or flight-control surfaces.

The Director of National Intelligence said pilots will be encouraged to report UAP in an effort to collect additional data. That’s a change from the government’s previous stance, which often involved ignoring or downplaying the phenomena.

But the nine-page report cites “the limited amount of high-quality reporting on unidentified aerial phenomena” which “hampers our ability to draw firm conclusions.” The word “alien” doesn’t appear in the document.

The report calls for an effort to “standardize the reporting, consolidate the data and deepen the analysis” of UAP occurrences, saying reported events probably fall into a swath of categories. That includes airborne clutter, like birds and balloons, natural atmospheric phenomena and even “foreign adversary systems.”

In a move that will surely be noted by believers in alien life and conspiracy theorists, there’s a final “other” category for events that the report describes as a “catch-all” for unexplained events.

Saying that data limitations are the biggest hurdle, the report adds that “we may require additional scientific knowledge to successfully collect on, analyze and characterize some” of the phenomena. That includes ensuring that pilots and other members of the military, intelligence and scientific communities face less “stigma” for reporting such events.

“Although the effects of these stigmas have lessened as senior members of the scientific, policy, military, and intelligence communities engage on the topic seriously in public, reputational risk may keep many observers silent, complicating scientific pursuit of the topic,” according to the report.

The study also acknowledges that some objects may represent national security risks.

“UAP pose a hazard to safety of flight and could pose a broader danger if some instances represent sophisticated collection against US military activities by a foreign government or demonstrate a breakthrough aerospace technology by a potential adversary,” according to the report.

Speculation about the objects has ranged from technical glitches in military software to evidence that humans aren’t alone in the universe.

The public fascination with UFOs dates back decades, to the earliest reports of “flying saucers” and events such as wreckage recovered in 1947 near Roswell, New Mexico. But the intelligence report doesn’t touch on those.

The report’s release followed a closed-door briefing on its contents last week to the House and Senate Intelligence Committees by the FBI and Navy officials.

Lawmakers, including House Intelligence Committee Democrat Michael Quigley of Illinois, said the report is most notable for a shift in attitude by intelligence and military officials from decades of publicly dismissing reports of unidentified aerial phenomena spotted in the sky to seeking and uncovering more knowledge about them.